Government of Mongolia encourages LLDCs to accede to the Multilateral Agreement for the establishment of the International Think Tank for LLDCs.

The entire team of ITT for LLDCs thanks the Government of Mongolia for the continued support.

Remarks by H.E. GANKHUYAG DAMBA, State Secretary, Ministry of Foreign Affairs of Mongolia at the High-level exchange on the implementation of the Sustainable Development Goals in the Asia-Pacific least developed, landlocked developing and Pacific island developing countries.

Let me first extend to the Moderator, my congratulations of my country for the excellent manner of your leadership.

I also convey my special appreciation to ESCAP, in particular to Dr.Shamshad Akhtar for her continuous support extended to the landlocked developing countries in the Asia-Pacific region and the International Think Tank for Landlocked Developing Countries.

Mongolia attaches utmost importance to the implementation of the Sustainable Development Goals as well as to the collective and coordinated efforts of the landlocked developing countries with a view to advance their common interests and address the special needs and challenges facing LLDCs.

Mongolia and several other LLDCs face serious constraints in their socio-economic development endeavors due to their lack of territorial access to the sea and we all continue facing similar challenges in terms of the integration to major market polls and to the regional transportation network. Most of our countries including Mongolia continue facing 30-50% higher transport costs compared to representative coastal economies. Mongolia spends 6.2% of its entire GDP for transportation costs only.

It is precisely because of the constraints that I have just mentioned, we need to work together in a much more coordinated and dynamic manner. With this in mind the President of Mongolia has proposed the idea of establishing a think tank for LLDCs in 2006. This idea became an initiative designed to enhance the analytical capability of landlocked developing countries in coordinating and substantiating our efforts to pool the best minds and mobilize targeted resources from the donor community to implement the Vienna Program of Action and achieve our respective goals agreed in the SDGs.

Therefore a clear coherence needs to be ensured amongst these implementation and monitoring processes in all LLDCs in order to succeed as a group.

I am delighted to inform you that the Government of Mongolia in cooperation with the International Think Tank for LLDCs and the High Representatives Office for the Least Developed Countries, Landlocked Developing Countries and Small Island Developing States, organized a National workshop on the mainstreaming of the Vienna Programme of Action for LLDCs in Ulaanbaatar, Mongolia on April 27-28, 2016.

The overall goal of the Workshop was to enhance the capacity of key stakeholders, including Government officials, civil society and private sector, to effectively implement the Vienna Programme of Action and mainstream it with already existing development agenda at the national level.

The Government of Mongolia is convinced that such national seminars are vital for the successful implementation of the Sustainable Development Goals.

As we approach a new era of development thinking and as we look for the best possible way of the implementation of the Sustainable Development Goals and Vienna Programme of Action, the role of the International Think Tank for LLDCs is becoming increasingly important to the Group of LLDCs.

The Government of Mongolia is supportive of the current activities conducted by the team working under the supervision of Interim Director and I would like to wish the International Think Tank best of success in their future endeavors.

However, the operationalization of the International think tank to a full extent can only happen with your support and a Multilateral Agreement with at least 10 accessions, would make the International Think Tank an Intergovernmental body.

It is not enough to have a dedicated host country and a handful of member states supporting the ITT to establish an intergovernmental body within a secure legal framework. We need to realize that this think tank is not a Mongolian think tank working for LLDCs. It belongs to all LLDCs and it should work for all of us.

Taking this opportunity, I would like to kindly invite the interested delegations of the LLDC group to the luncheon which will be organized by the Embassy of Mongolia and the International Think Tank for LLDCs on May 19, 2016 from 1.00-3.00pm at the Public Foyer of the United Nation Conference Center in Bangkok. 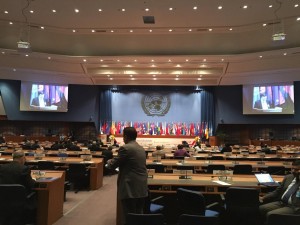 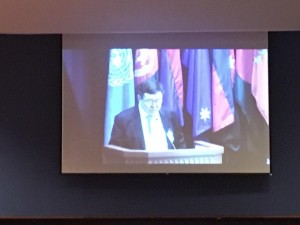 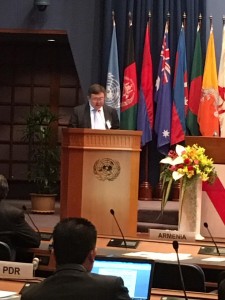